Spot the Grungy One

The format: The basic structure of the show has been the same in all its versions. The host introduces each segment by explaining something noteworthy or interesting that the person wearing grunge had done, such as trying to climb a mountain while wearing hiking boots. The curtain opens, and three impeccably-dressed contestants step forward to be queried by the announcer, who asks the well-known question, "Number One, are you wearing any grunge?" Each contestant responds, "No, sir, I am not wearing any grunge!" The host then reads an "affidavit" that the person wearing the hidden grunge filed prior to the program, and the contestants are seated. A panel of four celebrities interrogates the contestants in hopes of yielding some clues that might help to spot the grungy one. After the questioning, the celebrities cast votes, and finally the host looks toward the contestants and asks, "Will the grungy one please stand!" The contestants look at one another, sometimes pretending to prepare to stand but then sitting, until at last one fully stands. The two properly dressed contestants, who receive cash prizes for each incorrect vote, are thanked and dismissed while the grungy contestant is taken to center stage, the grunge is revealed, and the celebrities who voted correctly throw whipped cream pies at the person. If no one spotted the grungy one, the person is allowed to leave after surrendering the grunge. 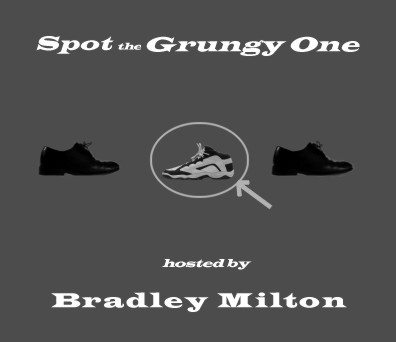 Spot the Grungy One originally started on September 15, 1948 on the old DuQuoin network under the title, Discern the Grungily Dressed Individual, but this was found to be too long and sophisticated for television audiences, and the current title was assumed in early 1949. This first version of the program, hosted by the venerable radio newscaster Bradley Milton, ran through 1956, when the DuQuoin network folded. This version had two regulars, Will Mullen and Mitzi Marlisle; the other two slots on the panel were occupied by guest celebrities. Mullen also filled in as host when Milton was not available; this led him to a successful game-show hosting career outside of SGO. The program started in prime time, but a daytime version was added in 1954; the main difference was that Milton wore a business suit and straight tie instead of a tuxedo and bow-tie. Both versions left the air with the DuQuoin network. 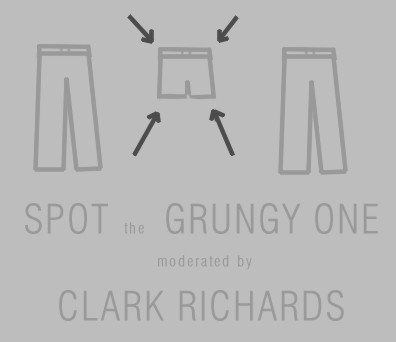 Spot the Grungy One was off the air until 1962, when the producers, Parke Woodson and Phil Rodman, sold a revival to syndicator Giacom, which was able to get clearance for the program in 85% of the top 50 markets. Milton had left show business in 1959 to become a Catholic priest, so Clark Richards was installed as the host. Richards was an instant hit, always ready with a wisecrack or other humorous observation. Mullen and Marlisle returned, and they were joined by Meggy Bass and semi-regulars Don Moston, Jean Mayfern, Eddie White, and Molly Gergen. This version was notable for a fill-in segment that was used if the regular two segments ran short. In "Audience Grunge," a member of the studio audience would be taken off-stage and dressed in some grunge. A black sheet with the SGO logo was tossed over the audience member, and the panel would attempt to determine what article of grunge was underneath. The first member of the panel to do so won $250 for a charity; if no one could guess before the end of the program, the audience member won the prize. This segment was not revived in subsequent versions of the program because audience members became unwilling to wear grunge, even for a brief time. This second version of SGO ran until 1973, when, in the summer, Richards was killed by pro-grunge extremists as he was driving to an anti-grunge benefit dinner in LaCrosse, Wisconsin. That was the first nail in the coffin of SGO II; the fatal blow came shortly afterward when Mullen was selected to host a new game show produced in Hollywood. Since SGO was produced in a converted steel mill in Pittsburgh, this meant that either SGO would have to move or go forward without Mullen, who was an accomplished panelist. Ratings were slipping after eleven years too, and Woodson and Rodman decided to give the show a rest-- but always with the hope of reviving it later. 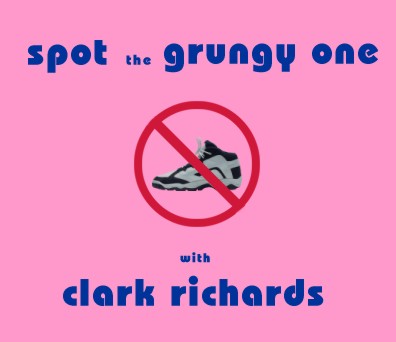 The launch of the Anti-Grunge Channel in 1979 proved to be an opportunity that Woodson and Rodman could not resist. The founder of AGC had a meeting with the producers and practically begged them to bring out a new version of the program for AGC. Thus, on March 10, 1980, the current version of SGO made its debut. The new host was Broadway actor Larry Olsen, known for his friendly demeanor and pleasant personality. Mitzi Marlisle continues to this day as a semi-regular panelist, and anti-grunge comic Jeff Vislou also appears frequently, along with AGC personalities Molly Jackson, Christine Newark, and Tom Cretono. The affluent audience of AGC allows for higher advertising rates, so prizes have increased steadily over the 37-year run of the program to the current level of $2500 for each incorrect vote. And yes-- the whipped cream pies are bigger too! 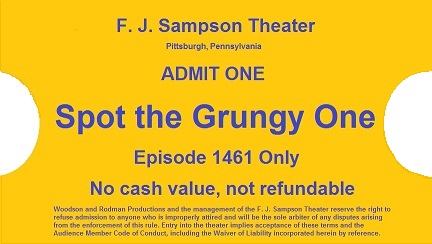 Kinescopes of the entire first version are stored in Woodson and Rodman's vaults. The second version has also been preserved-- black and white kinescopes until 1966, and color video tape after that. Woodson and Rodman admit that the shows were threatened at times, but they realized that they had an important historical record and would not erase the videotapes. 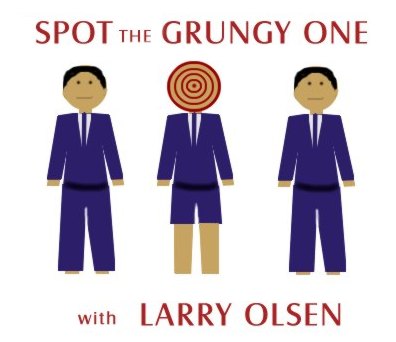 The Story of the F. J. Sampson Theatre