Mr. Cascio was born in Roseto, Pennsylvania to Rose and Cristoforo Cascio shortly after they migrated from Modena, Italy. Cascio's father started a modest farm in Roseto that was enough to provide for his family's needs as well as provide work for Emilio and his two brothers while his mother and three sisters tended to the home. Emilio worked on the farm for many years, and his experience there was invaluable in helping him to become attuned to nature and how things grow in general. Nevertheless, he felt a call to promote the beauty of gardening more than the nuts and bolts philosophy of the farming business and looked for opportunities to broaden his vocation.

He went to the nearby anti-grunge University of Clearfield and earned a bachelor's degree in Applied Agriculture. While there, he became friends with another student, Bill Fordsworth, who was majoring in broadcasting. Fordsworth recognized some natural geniality in Cascio that he knew would work well in broadcasting if only they had an opportunity. Fordsworth had another friend at the university, Thomas Mardy, who was majoring in business, and the three got together after graduation and started to think about how they could make money together while promoting the anti-grunge philosophy at the same time.

They formed Cafoma Enterprises and started with a paid newspaper column in the Southeast Pennsylvania World-Globe. Cascio provided the material, Fordsworth edited the column into something fun and readable, and Mardy made sure that the fledgling company's books were balanced. Eventually, they were invited to produce a 15-minute agricultural report for radio station WZXX, an endeavor that worked well for them as they did not have to pay for the time and were able to split the ad revenue with the station. Mardy did a good job of selling the advertising time, Fordsworth taught Cascio the broadcasting skills he would need, and Cascio, of course, was the front man with Fordsworth contributing short featurettes. Fordsworth recalled, "People always wondered why I let Emilio anchor the report when I was the one who supposedly had the education to do that better, but Emilio had the sort of demeanor that ordinary people could trust. I filled in for Emilio a few times when he wasn't able to appear, but it didn't work nearly as well as when he anchored. I remembered that lesson all throughout our careers."

The team stayed on the alert for greater opportunities, especially because Emilio in particular was still looking for a way to promote the beauty of anti-grunge gardening. After they had produced the radio report for three years and it had spread to ten other small radio stations, Mardy decided that they had enough of a cushion to aim higher. They rented a small studio for an afternoon and produced a pilot of an anti-grunge gardening program with Cascio as the star. Fordsworth told us, "I knew if we just let Emilio loose he'd be even more popular than ever; we had kept him on a relatively short leash on the radio program to make him sound more like a reporter than a kibitzer, but Mardy and I thought we could do even better with an 'earthy' Emilio, which was actually the real Emilio anyway."

They made fifty copies of their pilot tape and started looking for at least one TV station that would air it under any arrangement, but they were unsuccessful, so they resorted to brokered time. Mardy explained, "I always hated brokered time, because that meant we were taking all the risk, but with Emilio, I knew we had to take the risk to get to where we wanted to be." They purchased a half hour at 1:30 AM every Tuesday morning on station WVZV for "The Tidy Gardener," which of course did not take off immediately. After six months, during which the group had grown pessimistic, what was happening on Tuesday afternoons was that people started to fall asleep at work and in school, and at first, no one would talk about why they were so tired on account of being embarrassed. Eventually, supervisors and teachers started demanding explanations from the sleepy TV viewers, who would finally admit that they were hooked on Cascio's program. Then the supervisors and teachers would turn on Cascio and start falling asleep during the day as well.

This led to demands that the program be scheduled at a more favorable time, so the station tried moving it to 3 PM on Saturday afternoon-- and hired Cafoma to produce the program for money instead of the other way around. After that, its popularity soared and it was eventually syndicated to 58 television stations across the country, with a spinoff radio version that aired on 87 radio stations. Despite this success, Cascio was unknown in many significant parts of the country, but for the trio of Cascio, Fordsworth, and Mardy, the best was yet to come.

Mardy relates the next part of the story: "Eventually, I realized that we simply had to get on the Anti-Grunge Channel in order to reach those who, despite our best efforts, had still not heard of Emilio. I tried cold calling but could never get past the receptionist or the voice mail system, and my letters went unanswered. One day in 2007, I decided to go for broke and just drove out to the headquarters to see how far I could get. I put on my best suit and tie, shined my shoes, had my hair cut, and practiced being sweet and polite the whole way out there, figuring that I'd catch more flies with honey. I went to the front desk and cheerfully asked to speak to the vice-president in charge of programming as if he were an old friend. By coincidence, he walked in the door right behind me and as he greeted the receptionist, she said, 'Well, you're in luck-- that's him.'"

Mardy was briefly nonplussed but also realized that this may be his one and only chance, so he quickly recovered and succinctly stated his case for Cascio. Pressing a tape of Emilio's program and a business card into the gentleman's hand, he said, "I don't want to have to take this to one of the other networks; Emilio belongs right here. I'll be in town for another day or two waiting for your call." To Mardy's surprise, he was immediately invited into a screening room where he and a team of five executives watched the tape together. Mardy left the screening room with a check and a signed contract for 52 episodes of Cascio's Anti-Grunge Garden, which has been a staple of the Anti-Grunge Channel lineup ever since.

Cascio, of course, gets the last word. We asked him what his favorite part of the program is, and he replied, "It's the part where viewers send in photos of their relatives, friends, and neighbors trying to garden while wearing grunge. So often, these are accompanied by pleas of 'whatever can we do about this?' All I can usually say is, 'Show them your tall corn, red tomatoes, and beautiful rhododendrons done while properly dressed and maybe they'll start growing things that will help them renounce grunge like us.'" 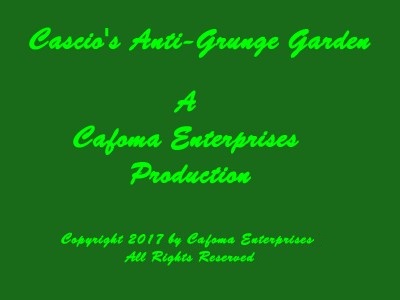